With Wellington in the Peninsula is a first-hand account of the 71st Highland Light Infantry's part in the Peninsular War written from the point of view of a private in the 71st Highland Light Infantry. It was originally published in 1827 as Vicissitudes in the Life of a Scottish Soldier but was perhaps too raw and real for the genteel reading public of the time. It sank into obscurity and until its re-issue earlier this year by Pen & Sword the entire text was only available on the shelves of a couple of major university or national libraries. I came across it at the National Library of Scotland.  While establishing that the book was what it claimed to be, I came across two or three other little known accounts written by other soldiers of the 71st and incorporated some of the information they provided into With Wellington in the form of footnotes. I also read first-hand accounts written by soldiers from regiments which fought alongside the HLI and used them to help prepare some battle and campaign maps for the book. The introduction to the book attempts to paint a picture of the regiment at the time of the Peninsular War and identify the anonymous author of Vicissitudes.

What Others Have to Say -

The venerable Scots Magazine made With Wellington it's Book of the Month for January 2016, though the magazine's reviewer declared he usually has little time for military memoirs. Scots Magazine is very good at protecting its content on line so there is no link to the review. Instead I had to copy it out -

"Such is the drouth for celebrating conspicuous anniversaries that this reprint of an 1827 publication originally titled Vicissitudes in the Life of a Scottish Soldier has been none to subtly rebranded in the Waterloo-crazed year of 2015 as With Wellington in the Peninsula.

This is despite the fact that Wellington is just an occasionally name-dropped bit-part player in this remarkable memoir of an anonymous Glasgow private of the Highland Light Infantry. According to its editor, Paul Cowan, it may have been ghost-written by George Robert Gleig, a retired officer from Stirling. If it was ghost-written it is remarkably accomplished, for it presents a convincing voice from within the lowest echelons of the rank-and-file as he fought his way through eight wearying years of the Napoleonic Wars in Spain, Portugal, the Netherlands and France.

The I-was-there intimacy of its author's blunt, wry, funny and often shocking observations caused it to be branded "trash" by what Cowan calls "that bastion of Tory privilege within the armed forces, The Military and Naval Magazine". If you like me are among the least military minded of people, here is all the ammunition you will ever need to heap scorn on the very concept of wars.

"How can a private pretend to see a whole engagement?" he asks. "The whole thing will plainly be seen to be utterly impossible, when it is considered that the length of a stone's cast is often the extent of his view, while the conflict extends over miles."

"One of the men actually brought in a French prisoner hooked by the cheek with his fixed bayonet." This is followed by the reassurance that "this was not done with any cruel intention, but in the mere hurry of the moment".

The mere hurry of the moment is what this book is all about. I don't care much for military memoirs, but I couldn't put this one down.

Protoview - a service used by librarians and other book specialists - had this to say:-

Enlisted memoirs from the Napoleonic Wars are rare. . . only about 25% of those published in the past 200 years. With Wellington in the Peninsula is unlike any other I have read - either by an officer or enlisted soldier. It is highly entertaining, but also thought provoking for it tells what a soldier felt about his officers, being in the army, and being exposed to danger for years on end.

The 71st Highland Light Infantry Re-enactment Group take a very well informed interest in the activities of the HLI during the Peninsula War and so I'm delighted that With Wellington appears to have passed muster with them. Here's part of what their reviewer had to say:-

The editor’s (Paul Cowan) research is shown clearly starting with a brief overview of the 71st‘s campaign during the period and continuing with many facts to support his view that this was written by two members of the regiment. Excellent footnotes are found throughout the account making this a very easy book to follow. There is enough information at hand to fully appreciate the tale but not so much that the reader becomes became bogged down in facts and figures. This is after all a human tale of a group of men living their life, not a dry text book.
I would thoroughly recommend this book, it is an honest account of life in the period. I can fully understand why it wasn’t overly well received in its day but think that it is the unsympathetic yet balanced nature of the account that make it so valuable now. Life was neither full of horror and death, but neither was it six years of japes and humour. The truth lies between both and this account shows that. Humour can be found in the darkest of situations.

The book also seems to have struck a chord with modern soldiers too. This is part of what the reviewer on the popular, but decidedly unofficial, British Army website Arrse had to say about With Wellington - "(T)his is a fascinating account of the ordinary soldier campaigning with the British Army early in the 19th Century" and "This is a good book to read, and the squaddie is very much to the fore, how he was treated by his officers, generally very well where they could, how he was fed, watered and quartered but probably most importantly how he fought, shoulder to shoulder in Line..... If you like the Peninsular Campaign then this is a good tale of the sharp end."

The full review can be read at Army Rumour Service

And, I really hoped the Napoleonic War expert Robert Burnham, author and editor-in-chief of the Napoleon Series website, would review With Wellington in the Peninsula. Here are a couple of the things he had to say -
"With Wellington is unlike any other (Napoleonic War memoir) I have read - either by an officer or an enlisted man. It is hugely entertaining, but also thought provoking for it tells what a soldier felt about his officers, being in the army, and being exposed to danger for years on end." and "It is the most candid memoir of the British Army I have ever read." To read the full website article Napoleon Series Review

So far, I've only been able to find three other reviews; one on Amazon.co.uk -

(Five out of Five)

One in Scots Heritage Magazine :-

Few men from the 71st Highland Light Infantry who sailed with Wellington to Portugal returned six years later. This new rendition of this honest tale includes little known diary entries and other accounts written by the author's contemporaries, which taken together give rise to a starkly honest picture of war.

And this one on firetrench.com :-

This is a first-hand account of the Peninsula War by a soldier who was there. First published in 1827, this is a primary source account, that includes material from others who fought in the campaigns in Portugal and Spain. This material has been sensitively edited to produce a new book with illustration, mainly in the form of maps. The author has written with humour, colour and frankness that has lost nothing in the editing. It is not a history book or a stiff account written late in life by an old soldier. The text flows and has character. The author attempts to paint a comprehensive picture of a series of campaigns that took British soldiers into France and the defeat of Napoleon. The result is an entertaining and informative story that reads well and will appeal to all who are interested in the period. A very worthwhile book.

The Revolutionary and Napoleonic Wars were not a testament to British arms. The Royal Navy fought a series of engagements around the world with style and originality, as well as of courage and determination. Many of these engagements were brilliant, and all creditable. If the wars had only been naval engagements, the British could have drawn great comfort from the performance of their military forces. Unfortunately the battles on land were generally less creditable and some were major disappointments. Often the Navy had to stand in to extricate soldiers and insert them at another point. The leadership of the Army left much to be desired and one recurring problem was that commissions could be bought and competent soldiers could have their commissions bought out from under them by coffee house fops who had little knowledge of soldiering.

When Arthur Wellesley, later 1st Duke of Wellington, was sent to take command in Portugal, Britain looked close to being forced out by the French. He soon established himself and turned the situation around. He was particularly successful in exploiting his troops and his allies, but even more importantly, he manipulated the French and prevented the French armies in Iberia coming together in overwhelming numbers. He managed to get the best from his troops and to walk the thin line between tyrant and mentor.

The author comes across as a cynic, with a well developed sense of humour, who was not afraid to be critical of his superiors. He has made no attempt to produce a sentimental account of his experiences, or to add a layer of varnish to conceal uncomfortable truths.

The 71st were an elite infantry unit that sailed from Cork with Wellington in 1808 for Portugal and they were constantly at the forefront of the actions. It was a hard war and very few of those who sailed from Cork in 1808 were to survive and return six years later.

The Adventures of a Highland Soldier 1808-1814 reveals how the Peninsular War was see through the eyes of an ordinary Scottish conscript. Few men from the 71st Highland Light Infantry who sailed with Wellington to Portugal returned six years later. The new rendition of this honest tale, edited by Paul Cowan, includes little known diary entries, written by the author's contemporaries, which taken together give rise to a starkly honest picture of war.

Three Stars out of Five 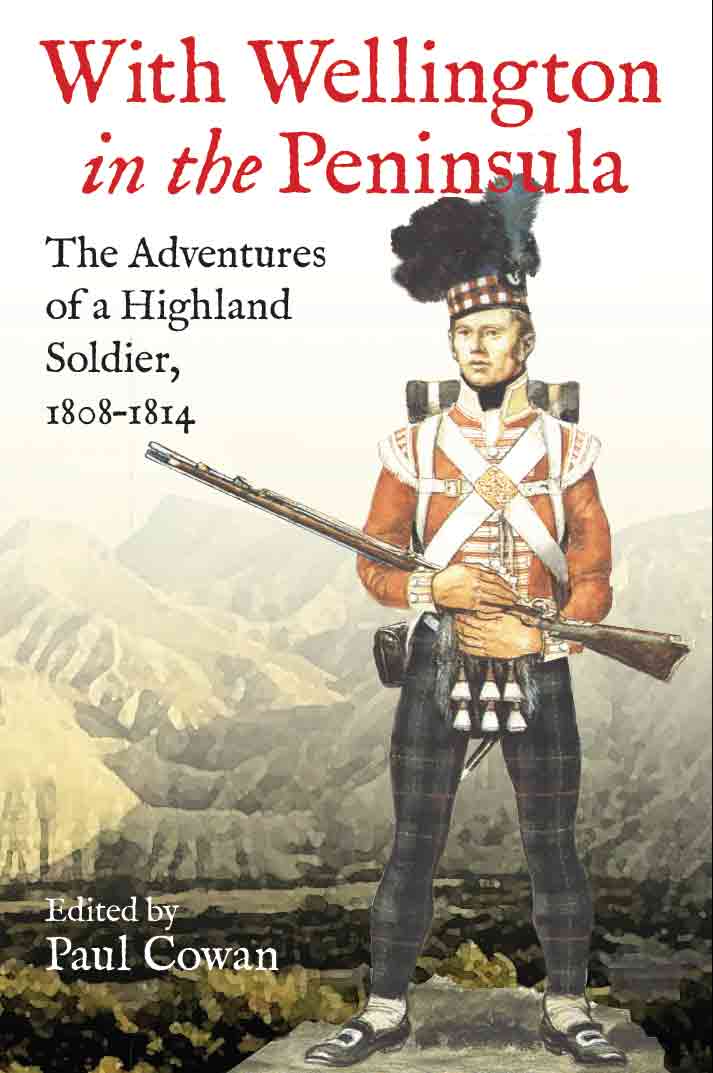 There is now an article based on some of the research done for one of the footnotes in the book - The Real Mackay?

We have 199 guests and no members online