It was one of the most famous incidents in the Peninsular War. The capture of French general Antoine Brennier by the 71st Highlanders made newspaper headlines back in Britain and was the subject of several popular prints and at least one commemorative jug.

The newspapers back home reported Brennier’s astonishment when his offer of his purse and gold watch as a reward for sparing his life was rejected. The Highlanders’ commanding officer, Lieutenant Colonel Denis Pack, was said to have told Brennier : “We are soldiers, Sir, not plunderers.” Another version gives Pack’s words as: “Do not be surprised, we come not as robbers.”

The corporal officially credited with capturing the Frenchman at the Battle of Vimeiro in 1808, John Mackay, was promoted to the lowest category of officer, ensign, on the orders of the Duke of Wellington and posted to the 4th West India Regiment.

Pack was proud, Wellington was proud and the British public was proud. But some in the 71st Highlanders were not impressed.  Mackay was accused of stealing the credit for capturing Brennier from a young Irish recruit.

If the 95th Rifles were the Special Air Service of the Peninsular War, then the light infantry units, as the 71st was to become not long after Vimeiro, were the commandos or paratroopers of their day. And as with today’s elite units, a number of rank and file members of the 71st documented their experiences after the fighting ended.

One of those regimental reminiscences, Vicissitudes in the Life of a Scottish Soldier straight out accused Mackay of being a fraud.

The anonymous Glasgwegian author of Vicissitudes claimed that the injured Brennier, trapped under his dead or dying horse, had instead been captured by a 19-year-old Irishman he identified only as Gaven. The young recruit apparently declared : “By Jasus! I have taken the sarjant-major of the French.” The anonymous author said Mackay then arrived on the scene but lacked the “barefaced” cheek to accept the proffered purse and watch that so many of the Highlanders present knew should have gone to the Irishman.

Vicissitudes then went onto lambast those who showered Mackay with honours, including a gold medal from the Highland Society in London. “What was the cause of this injustice, is the natural question,” asked the narrator of Vicissitudes in 1827, before answering his own question. “I blush to answer: it was because Mackay was a Scotchman, and further more a Highlander, the latter was an infallible recommendation to a set of old drivellers, who lay, and lie still, constantly on the watch, to hunt out and blaze forth to the world anything tending to distinguish the Highland name – despite the truth.” 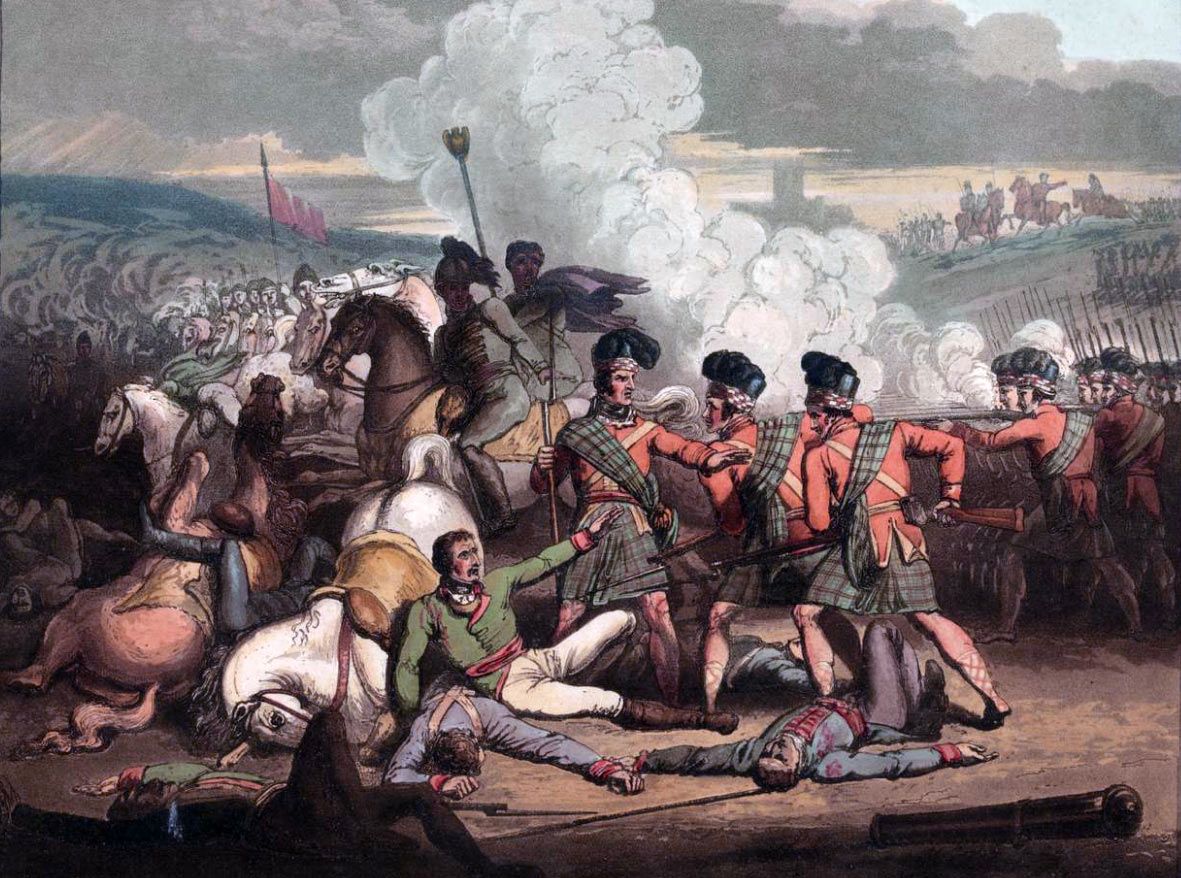 A contemporary artist's rather inaccurate version of Gen. Brennier's capture. The 71st Highlanders by 1808 wore tartan trews rather than kilts.

This outburst could perhaps be dismissed as sour grapes or the result of a grudge but for what the regiment’s other rank and file chroniclers had to say, or not say, about Brennier’s capture.

Former Forfarshire shoemaker Balfour Kermack served with the 71st throughout the Peninsular War and produced a brief summary of his service sometime in the 1840s. In it he also attributed Brennier’s capture to an Irish private, whom he did not name, who referred to the general as “the Sergeant Major of the French”. But Kermack came up with an alternative reason why the Irishman was not honoured. He claimed that the Irishman had been prevented by Cpl. Mackay from accepting money from the Frenchman.

Bugler John Macfarlane also served with the 71st throughout the conflict and left behind an account of the Battle of Vimeiro. The Glasgow man chose his words very carefully and simply noted that Mackay escorted Brennier to battalion headquarters.

The most famous first-hand account of the battalion’s part in the Peninsular war is Journal of a Soldier of the 71st. Perhaps tellingly, it completely ignores this most famous of the regiment’s exploits during the conflict. It has long been known that the book’s supposed author “Thomas” never existed. The real author was a Glasgow book binder called John Howell. He later admitted that he got most of his information from two members of the regiment, James Todd and Archibald Gavin. But military records show the pair could not have witnessed all the events related in the book. Military historian Stuart Reid was recently able to add a third soldier to the list of Howell’s sources, Joseph Sinclair. Journal of a Soldier was the Bravo Two Zero-style bestseller of the early 1820s and its silence as regards Mackay and Brennier is both puzzling and suspicious. Perhaps Howell’s informants could not agree on what happened or maybe the wily Howell knew better than to rock the boat.

The fifth rank and file memoir is based on a diary kept by Irishman William Gavin. It is the only one that toes the official line. William Gavin is not the “Gaven” credited with capturing Brennier. That was most likely 19-year-old Private John Gavin who died a year after Vimeiro. William Gavin, like Mackay, was promoted from the ranks to officer status. The Duke of Wellington authorised a promotion in recognition of the 71st’s fine performance at the Battle of Fuentes de Onoro in 1811. He might have expected it to go to soldier who fought in the battle but it went instead to William Gavin, who was in Britain at the time.  Perhaps Gavin was not the kind of soldier given to rocking boats.

Mackay’s own behaviour when he was presented with his gold medal by the Highland Society in London was also a little odd. He was honoured along with another national hero of Vimeiro from the 71st, Piper George Clark. Clark was badly wounded in the leg but nevertheless insisted on playing his comrades into action as he lay on the ground bleeding. A similar performance in 1897 on the Northwest Frontier of India would win Piper George Findlater of the Gordon Highlanders a Victoria Cross. Clark had to settle for a set of bagpipes from the Highland Society.

At the joint presentation in London Clark made a speech declaring his new pipes “sacred” and pledging never to surrender or forget he was a Highlander. He then treated the society’s members to an impromptu piping recital. When Mackay was called forward to receive his medal, he simply bowed and returned to his seat. Modesty or a guilty conscience? There were those amongst his former comrades in the 71st who would appear to have had grounds for suspecting the latter.

* Read an article about the Royal Scots and their desperate fight against the Bolsheviks on Armistice Day 1918 - Forgotten War A second article, looks at the same battle but through a Canadian lens .

*The 70th anniversary of one of the British Army’s most notorious massacres of civilians is coming up. See Batang Kali Revisited

We have 147 guests and no members online