As Canadian confederation loomed just over 150 years ago, few knew that the British troops guarding the

frontier against invasion from the United States were caught up in a major ammunition crisis.

By early 1867 the 12,300 or so regular soldiers in British North America had nearly all been

against Fenian raiders, or perhaps even the United States Army.  The new breech-loaders

replaced the muzzle-loaders used by British in 1866. The Canadian volunteer regiments were

Britain. But things were not as they seemed.

“The new rifles were found to be defective in the breech, and alterations were made which

necessitated a new description of cartridge; and perhaps it is worthy of record that The

Regiment was, not withstanding the frequent incursions of the Fenians, a considerable time

without a single round of ammunition,” Richard Higgins, an officer in the British 25th

(King’s Own Borders) Foot was later to write regarding the arrival of the Snider-Enfield rifles in January 1867.

summer of 1866. The Fenian Brotherhood, as they were known, included many veterans of the

independence from British rule. British and Canadian authorities feared that when the Fenians

breech-loaders fired three times faster than the rifles they were intended to replace.

a firing system patented by US inventor Jacob Snider.  The conversion involved cutting out the

lower part of the Enfields’ barrels, complete with the old firing mechanism, and replacing them

with Snider’s hinged breech fire system. The British decided it was cheaper to convert the

of the better-performing models of breech-loader available at the time, or to commission a new

one. As well as being done as cheaply as possible, the British specified that the conversions

were to be as accurate as the old Enfield muzzle-loaders, first issued in 1853. The Snider- 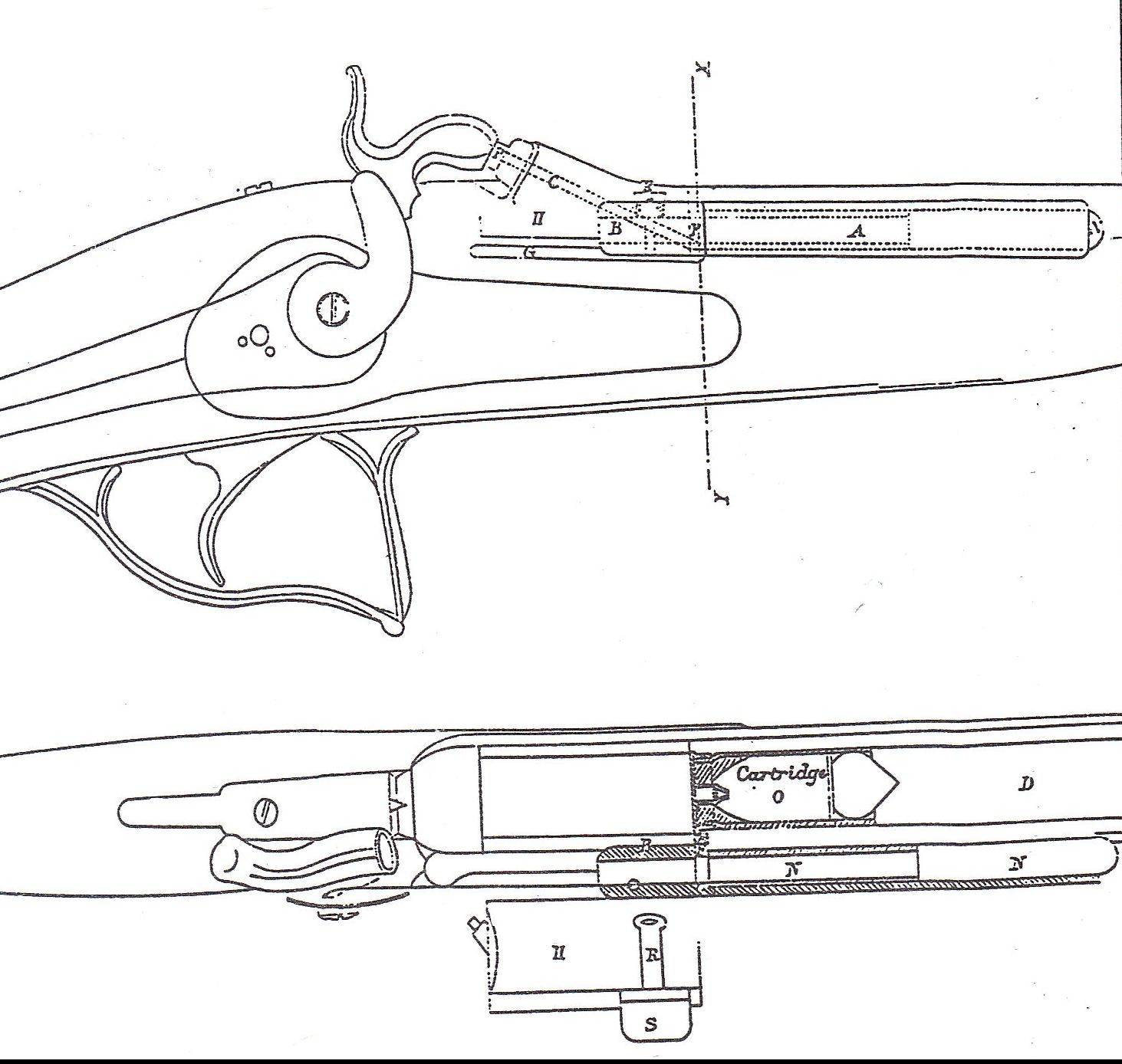 been hand-made by skilled armourers. Conversion of the Enfields using machinery and millions

of rounds of factory-produced ammunition proved a disaster.

In March 1867 the British Secretary of State for War, Lieutenant-General Jonathan Peel, told

production lines before authorizing their general issue. However, his hand was forced by an

urgent demand for breech-loaders from the Governor General of Canada, Viscount Charles

“We went on working at the gun factory day and night – and, I am sorry to say, sometimes on

Canada, before the navigation closed,” he said.

“In the meantime I sent sixty guns to Hythe for trial, and the first report was that the shooting

was more than favourable. Shortly afterwards the head of the Laboratory came to me and said

slight escape of gas, which threw up the breech-loading apparatus. We therefore proceeded to

try a new or No.2 cartridge, which was sent down to Hythe and fired with exactly the same rifles

which had shot so well in the first instance. The report came back to us that the cartridges would

hardly hit anything, and scarcely hit the target at all.”.

In fact, the superintendent of the British Army’s musketry school at Hythe, Maj.-Gen. Charles

Hay, had told his political masters in November 1866 that, “The shooting (of the Sniders) has

been most wild; many of the shots fall short of the target and others go no one knows where.”

The second, or No.2, cartridge had a stronger base than the original and the rifle breeches no

longer blew open when fired. The third version incorporated a shorter and lighter bullet which

The ammunition had long been mired in controversy. The “laboratory head” referred to by

patenting the original No. 1 cartridge. Serving officers were not supposed to patent the results of

superintendent. But it was not against the law and the Royal Navy allowed officers to take out

patents. Boxer eventually resigned from Woolwich in 1869 after questions were asked in the

House of Commons about his conduct.

cartridge and the patents of other firearms pioneers, particularly the work of London gunsmith

Brothers. But tiny flaws in the thin brass used to make the base of the cartridges allowed gas to

escape into the hinged breech when the rifle was fired, blowing it open. There were also

not sufficiently skilled for the work. Consequently Eley Brothers were not asked to produce the

No. 3 cartridge or any of the subsequent versions for use with the Snider-Enfield – though the

service by the Martini-Henry rifle. The unusable No. 1 cartridges were converted into blank

While Colonel Boxer at Woolwich experimented with the new cartridges, Snider was working on

alterations to the breech-loading mechanism, including an improved spent cartridge ejector.

regular soldiers in Canada. Questions were being asked about the loyalty of the Irishmen

serving in the ranks. About one-third of the soldiers in most of the nominally English and

both sides of the Atlantic by Fenian agents.

The men of the 25th Foot, later the King's Own Scottish Borderers,  had already proven their loyalty to the Crown in June 1866 when, still

armed with the old Enfield muzzle-loader, they had deterred Fenian raiding parties from

crossing the border with the United States into Quebec. On June 9 around 300 men from the

from Montreal, Waterloo and Granby which intercepted 200 Fenians near Pigeon Hill. The

Irishmen fled back across the border into the arms of waiting US troops.

have discouraged Fenian incursions in 1867. The Fenians, contrary to the fearmongering

spread by Canadian officialdom, were still armed in 1866 with muzzle-loaders. In 1867 the

Fenians sent 5,000 of them to New Jersey for conversion, by British gunsmiths, into breech-

loaders. These rifles were never used in anger and were finally confiscated in 1870 by the US

Enfields. The soft-nosed Boxer bullets were notorious for the horrendous exit wounds they

inflicted. Military historian Sir John Fortescue reported that he could put both hands into the

wounds inflicted on deer he had seen shot with a Snider rifle. In 1868 around 300 men of the

at the Battle of Arogee in present-day Ethiopia. The Africans kept coming after the first volley

redcoats had time to fire again. But the rapid fire, at least for 1868, of the Snider-Enfield came

into play as the British regiment managed to fire off thirty to forty soft-nosed rounds per second.

Despite the early problems with the Snider-Enfield , it became the standard weapon of Canada's

fledgling army. By 1869 the British had shipped around 82,000 of them to Canada. They were

used in both the 1870 Red River Expedition and the 1885 North-West Rebellion.

had been no major Fenian incursion into Canada during the ammunition crisis. The Times, that

Establishment mouthpiece, noted in March 1867 in an article about the first Snider-Enfields

shipped across the Atlantic, “Happily, these rifles were not required for actual service, or the

* Click to read - - Victoria's Royal Canadians - about one of the more unusual of the British regiments.

*Read an article about the Royal Scots and their desperate fight against the Bolsheviks on Armistice Day 1918 - Forgotten War A second article, looks at the same battle but through a Canadian lens .

* The 70th anniversary of one of the British Army’s most notorious massacres of civilians is coming up. See Batang Kali Revisited

We have 138 guests and no members online