Digging a tunnel under one of the most scenic parts of the Scottish Highlands seems a roundabout way to help win a war. In 1941 that is exactly what a group of Canadian hard-rock miners in army uniform were told they were doing.
As Hitler was preparing to launch his panzers into Russia, the Loch Laggan detachment of the 1st Tunnelling Company of the Royal Canadian Engineers was brought into north Scotland. Their role would be to bolster what was proving a lacklustre project to expand a hydro-electric scheme which was used to power an aluminum plant key to British aircraft production during the Second World War.
The detachment was formed out of a core of goldminers from Northern Ontario who had volunteered to join the Royal Canadian Engineers after war broke out. They turned out to need very careful handling and often behaved more like civilians in uniform than disciplined soldiers. Three, denied an extra 50 cents a day they felt entitled to, refused to work at Loch Laggan and had to be sent back to base in England. Others faced gradual starvation on army rations deemed inadequate for the hard physical labour involved and, Robin Hood-like, were accused of illegally killing a local landowner’s deer for survival.
Not a week went by without at least one of the detachment failing to show up for his shift or being unfit to work due to easily avoided illness, often alcohol-related.
And on top of this a civilian drilling team working on the same project was not above sabotaging the Canadians’ efforts.
The Canadians were sent to Loch Laggan to help dig a two-mile tunnel which would divert the flood water of the River Spey into Loch Laggan. The hydro-dam there fed the turbines which powered the aluminum plant at Fort William on the west coast of Scotland. The tunnel from Loch Crunachdan was expected to boost production at Fort William by almost 15%.
The 700-foot-long dam at Loch Laggan, east of Fort William, was part of a hydro-electric scheme completed in 1930 with a water catchment area of just over 300 square miles.
Work on the new tunnel was going painfully slowly due to a shortage of experienced tunnellers in wartime Britain. So, the civilian contractor involved, Balfour Beatty, turned to the Canadian Army for help. The British company agreed to pay the soldiers’ wages, accommodations, and food, and supply the drilling equipment. The money was to be paid to Ottawa. The Army was responsible for medical costs, injury compensation, and sending the soldiers on leave. 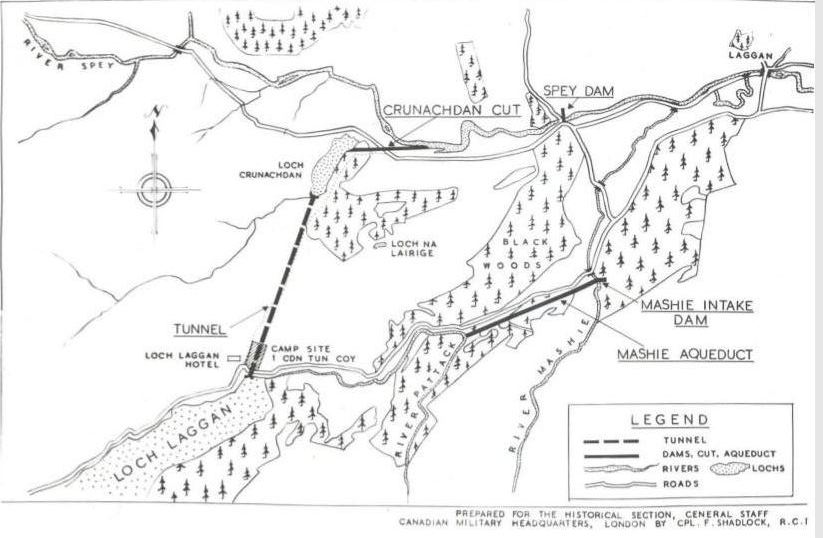 *The 70th anniversary  of one of the British Army’s most notorious massacres of civilians is coming up. See Batang Kali Revisited

We have 152 guests and no members online